With the winds in Grise Fiord finally calming down, we managed to depart Resolute Bay with another plane loaded with the last of our supplies and personal gear. The farther north you go, the harder and more expensive it is to find anything you left behind, so you always have to triple check before you leave.

The hamlet of Grise Fiord is very small and squeezed on a narrow strip of flat but rocky terrain between the ocean and steep cliffs. A couple of small icebergs were grounded close to shore, and in the process of being eroded by the pounding waves, clearly there was no immediate hope of us departing by boat to our field camp.

This year we are trying a new site: the first fiord to the east of Grise Fiord. On the first exploratory trip out there, the team already spotted balls of Arctic cod with seabirds and seals feeding on them, a walrus and a few narwhals – very encouraging and considerably more marine life than we saw during the entire research trip last year.

A couple days later, the seas were still too heavy to attempt a boat trip, so four of us headed by helicopter to the intended camp site to prepare the ground for all of our camp needs. We had to move rocks and boulders and then landscape with shovels and rakes to create level areas for the tents. In these remote areas it’s important to keep looking up on a regular basis and not get too engrossed in your work.  It’s a wild location frequented by polar bears that can move surprisingly stealthily and fast. We did not see bears this time around but there were fresh wolf tracks.

The great news is that today it’s a very sunny day with blue skies and calm seas. We will wait for high tide this evening, load up the boats and finally be on our way to camp… I hope. 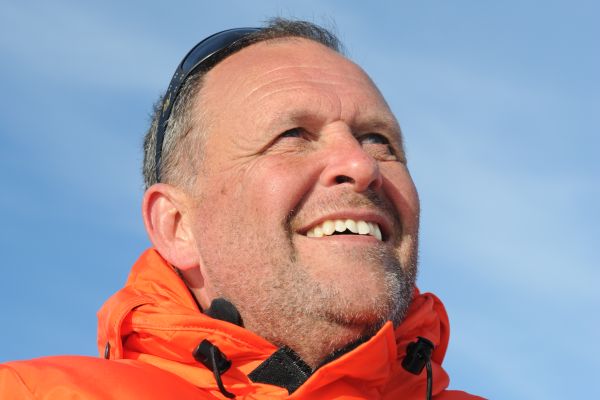 Clint Wright, the Vancouver Aquarium Marine Science Centre’s senior vice president and general manager, has ventured into Canada’s Arctic for the sixth year in a row to conduct research on narwhals, which make up a vital part of the Arctic ecosystem. Keeping track of their population size and understanding migration patterns are important in making sure their populations stay healthy. Clint joins a team of experts led by Fisheries and Oceans Canada. He will be providing regular updates on his research. This is his second blog post of this series.