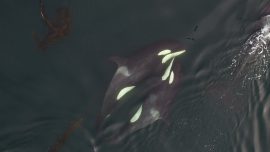 The waters of Kisumu bay, Kenya’s main entry to Lake Victoria, are covered with water hyacinth. The floating water plant is native to South America, and invasive in Africa and other parts of the globe. It invaded Lake Victoria starting in the 1990s, and it thrives on the agricultural run-off that pollutes the lake. Some fish species, such as catfish, do well under the floating, green expanse; but tilapia, a key species for local fisheries, is suffering. The water hyacinth also interferes with – and even stops – water travel and fishing. Via Phys.org

Six new species of bristlenose catfish were discovered in the Amazon and Orinoco River Basins in South America. Bristlenose catfish have body armor and defensive spines on their heads. Hard to reach field sites, great diversity within each of the species and old, discolored reference samples from the museums made them hard to identify. These discoveries will strengthen conservation efforts against goldmines, hydroelectric dams and unsustainable resource use. Via National Geographic

A major expedition is underway to learn more about Thwaites Glacier, a marine-terminating glacier about the size of England. The researchers will use a number of techniques, including fitting marine mammals with sensors to collect data from otherwise inaccessible areas. This research aims to learn more about the glacier’s recession, with current estimates crediting Thwaites with 4% of current sea level rise. Via BBC 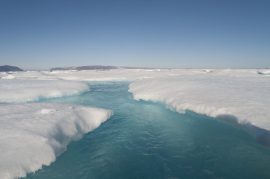 The United Kingdom’s Drax power plant has become the first in Europe to capture carbon from burning wood waste. This technology, called Bio Energy with Carbon Capture Storage, can reduce the overall amount of carbon in the atmosphere. Drax is testing a new method developed at Leeds University, called C-capture, which uses chemicals that are less toxic, however, this potential solution remains controversial for several reasons. Some of the wood may come from species-rich forests that should be conserved; using this method to reduce atmospheric carbon to target levels would require a colossal amount of land; and the material has to be transported and processed – requiring energy. Via BBC News

Scientists at the University of Manchester have published a new research in the journal Applied Energy. They have created novel wind and solar energy-harvesting flags that can generate electrical energy using flexible piezoelectric strips and flexible photovoltaic cells. Piezoelectric strips allow the flag to generate power through movement, and the photovoltaics is the current best method of harnessing electric power by using solar cells. These flags offer a cheaper and more sustainable solution to powering remote sensors and small-scale portable electronics which can be used for environmental sensing. Via EurekAlert!