What Counts as “Arctic?”

I’m in a village called Salluit, in a region of northern Quebec called Nunavik, on the edge of the Hudson Strait. It’s -24 C. There’s snow on the ground. The ocean is frozen. I’m just south of the Arctic Circle, but am I in the Arctic?

The answer to that question depends on how we define “Arctic.” The Arctic Circle, the most common classification of “Arctic,” is an imaginary line that circles the globe at 66 ° 34’ N’. Salluit is south of that line, so one might argue that I’m not in the Arctic. And yet, so many factors play a role in creating what we all think of as the Arctic.

So, why is the Arctic Circle drawn where it is?

Let’s pretend for a minute that it’s the day of the northern Winter Solstice—the shortest day of the year. In 2018, that will be Friday, December 21. You’re standing on the Arctic Circle and you’re waiting for the sun to come up. The sun will, indeed, come up, but it will only peek over the horizon and show about half of itself before it ducks back down out of sight. North of the Arctic Circle, on that day, the sun will not show itself at all. As you travel further north, there will be an increasing number of days during the winter that the sun does not rise, until you reach the Pole where the sun won’t rise for a full 6 months. South of that line, the sun will rise every day of the year.

That’s it. That’s the Arctic Circle.

So, if you’re a caribou, a polar bear, or a person, does that line really matter? (This is the interactive part where you answer, “No, of course not”.)

If an arbitrarily drawn circle does not define the Arctic, then how does one know when they’re in the Arctic? Most researchers, government agencies and NGOs use other, slightly-less-arbitrarily-drawn lines based on things that do matter to a caribou, a polar bear or person—things like how cold it is and what other life is around you.

If, for example, you’re interested in temperature, you may want to use the “10 Degree C July Isotherm” to define the Arctic. North of that line, it doesn’t get above 10 degrees Celsius in the warmest month of the year (July) on average.  That’s the purple dotted line in the figure below. 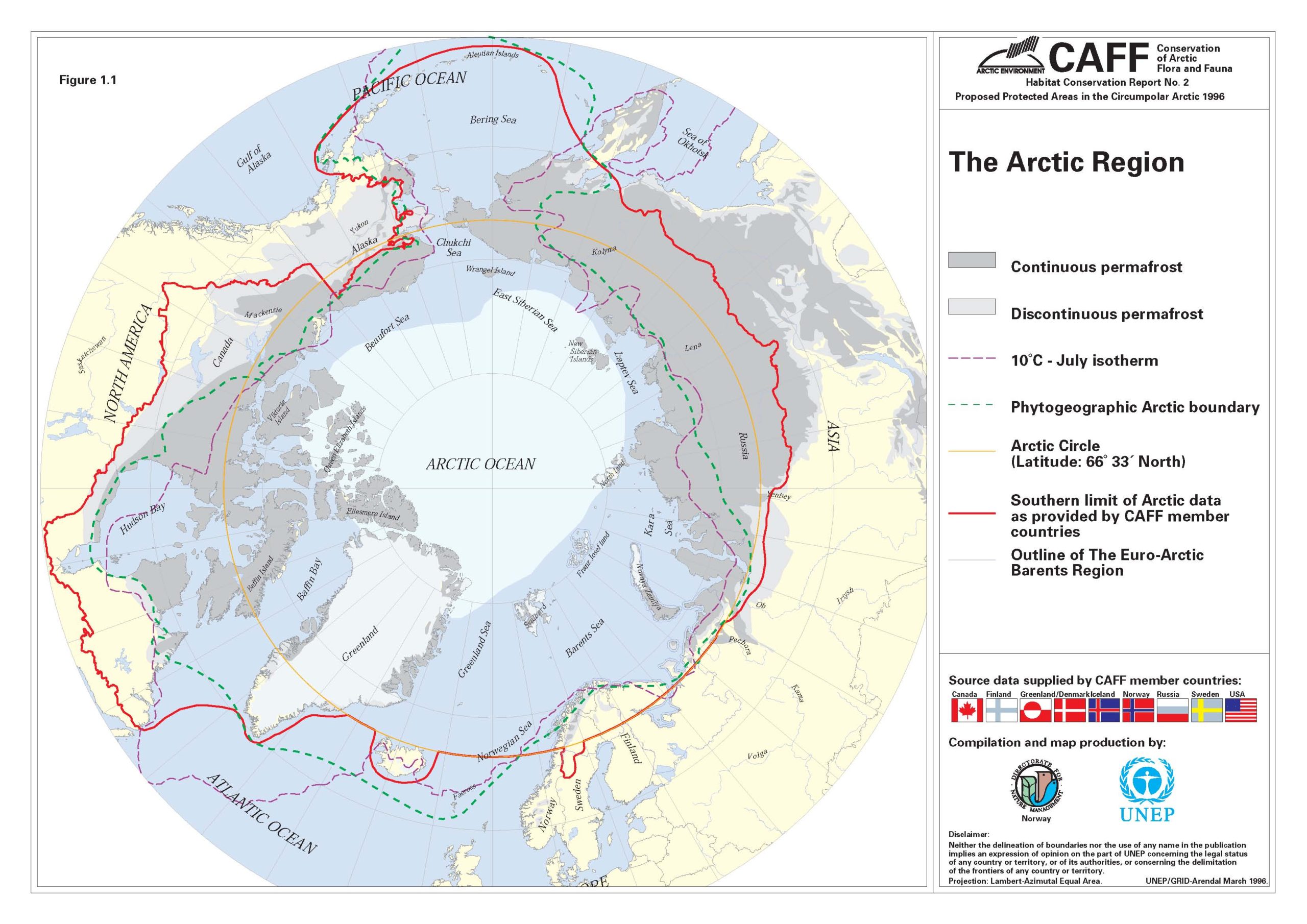 Based on the 10 degree July isotherm, Salluit, which averages 7.1 degrees Celsius in July, counts as Arctic.

Another criterion that can be used to determine what counts as Arctic is whether or not there is continuous permafrost (the dark grey areas above). If you’re interested in soil and water, this might be the one for you. Permafrost is ground that has been frozen for at least two years. The ground beneath Salluit is continuous permafrost (although parts of the permafrost in Salluit are thawing, causing lots of problems for buildings and infrastructure).

If you’re interested in vegetation, you may want to use the “phytogeographic boundary” to define the Arctic (the green dotted line above). It’s a big word for a simple concept: the tree line. North of this line, trees can’t grow. To be clear, some tree species can grow—like the Arctic willow—but they’ll only grow in shrub form. In the high Arctic, that means 8-10 centimetres tall. Salluit is well north of the tree line.

There are many other ways to define the Arctic: based on extent of permanent sea ice, distribution of species like walrus, or even culturally. What counts as Arctic, then, depends on why you want to define it in the first place.

Salluit may be below the Arctic Circle but it definitely counts as Arctic to me.